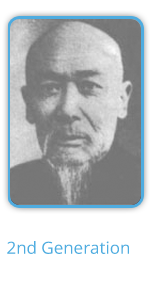 At birth he was named Yang Zhao Xiong and was later named Meng Xiang, and then Shao Hou, commonly known as “Mr. Big”.

Yang Shao Hou was also known to have had a very forceful nature, and both of these masters are considered to have been very demanding teachers; only interested in teaching those that could stand their tough training regimes.

In the early years he taught the ‘middle frame’ that was developed by his father, but later began developing his own signature style likely developed from the techniques taught to him by his uncle. This form or style was referred to as ‘small circle’. This was characterized by high and low postures with small movements done in a sometimes slow and sometimes sudden manner. His fajin was hard and crisp, accompanied by sudden sounds. Master Yang Jun describes him in this way “The spirit from his eyes would shoot out in all directions, flashing like lightning. Combined with a sneer, a sinister laugh, and the sounds of “Heng!” and “Ha!”, his imposing manner was quite threatening.” During practice with his students, Yang Shao Hou was not known for pulling his punches.

This gentleman taught Gong Yi the rest of the art and represents the 2nd Generation of our Taijiquan.