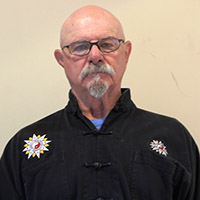 I am Sifu Gordon Ainsley

I first was exposed to Tai Chi Chuan when I was living in Manhattan in the early 1980s.  I studied with Sifu BP Chan at the William Chan club at 23rd and 7th Ave. He was all about getting his students healthy first by utilizing breathing, visualization, and meditation. His teachings were deep and knowledgeable. I was with him for about a year before I had to move back to Toronto.

My journey with the Wu family started in 1983. After spending about one-year researching I went to the Wu`s club on Parliament Street. Sifu Eddie Wu (Wu Kwong Yu) taught me the 108 movements of the form.  I accepted Sifu Wu’s invitation to become his disciple in 1989.   I have studied the double edge sword (Gim), Sabre Form and many types of push hands as well as Qigong (Chi Kung) and meditation techniques. One of the important aspects of the Wu style is the quality of the teaching. It takes many years of study and practice to become an instructor and it is a privilege to do so.

It has been an honor and a privilege to have studied with the 5th generation and gatekeeper of the Wu family, Sifu Eddie Wu (Wu Kwong Yu).  His teaching brought me to where I am today…studying with fourth generation Gong Yi disciple Sifu Rock Kwok Tai Ng.

I have been studying & teaching Tai Chi Chuan for 35 years. I am certified to teach all levels of  Tai Chi Chuan, several different hand forms, Qigong (breathing), meditation as well as self-defense and weapons.  I continue to research, train and study daily.

Let me explain the purpose and some of the benefits of these different levels of TCC:

3) Self-improvement and control through meditation in movement.

6)  Exposure to an art and philosophy that is interesting and energetic.

Benefits of our Tai Chi