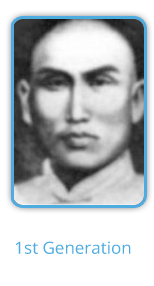 Yang Ban Hou (1837—1890) was an influential teacher of Taijiquan in Qing dynasty China, known for his bellicose temperament.

He was the senior son of Yang Lu Chan to survive to adulthood. Like his father, he was retained as a martial arts instructor by the Chinese Imperial family. He eventually became the formal teacher of Wu Quan You, a Manchu Banner cavalry officer of the Palace Battalion. Wu Quan You’s son, Wu Jian Quan, also a Banner officer, became known as the co-founder (along with his father) of the Wu Style Taijiquan. Yang Pan Hou’s younger brother Yang Jian Hou was a well known teacher of Yang Style Taijiquan as well. Yang Pan Hou’s son, Yang Shao Peng (1875-1938) was also a Taiji teacher.

Yang Ban Hou taught Wu Gong Yi the basics of our Taijiquan when he was in in his teen years this is the reason he is at the beginning of our thread of lineage.