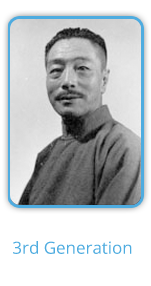 Gongyi was the grandson of the founder of Wu Style Taijiquan . Wu Quan You’s son, Wu Jian Quan, became the best known teacher in his family, and is therefore also considered the co-founder of the Wu Style. Gong Yi was his eldest son.

Tradition in the Chinese martial arts was that youngsters be taught by teachers of a generation older than their parents’. Since Wu Quan You had died while  Gongyi was an infant, he and his brother were taught as young men by Yang Ban Hou and Yang Shao Hou, who was technically a generation senior to their father. Yang Ban Hou , Yang Shao Hou and Wu Jian Quan were famous for their “small circle” martial expertise. The motions of Taijiquan forms and pushing hands are all based on different sized circles, small circle movements in the forms and applications follow a more compact pathway for different leverage applications than larger circles.

After the fall of the Qing dynasty in 1912, a new teaching environment was created. More people became aware of Taijiquan, and the former dynamic of small classes and intensive military instruction of relatively young students became less practical. Gong yi responded to the new demands of larger class sizes and older beginning level students by changing some aspects of the beginning level hand forms he taught. His modifications of the “square” forms he had learned from his father and the slightly different form he learned from Yang Shao Hou were distinguished by clear sectional instructions for each move in the form sequence, more compact “small circle” movements in the body and somewhat higher stances with the feet relatively closer together than in other styles of Taijiquan. Wu Gong Yi also formulated new styles of pushing hands based on smaller circles, most notably the “four corner” method of basic pushing hands.

Gongyi was part of the most important martial art contest ever organized when he fought Chan Hak Fu from the White Crane Kung Fu hard style Kung Fu school in January 1954.

In 1953, the fifty-three-year-old Wu was publicly challenged to a fight by the thirty-something Tibetan White Crane stylist Chan Hak Fu (陳克夫). The contest was arranged and fought in Macau in January, 1954. The ring was set up as if for a Western boxing match, and there were many rules prohibiting various techniques being used by the fighters; kicks, throws or joint locks, for example. The contest lasted not quite two rounds. During the second round, the judges ended the fight, declaring the contest a draw. This was done to ensure that there was no loss of face to either party. Both Wu and Chan invited the opposing sides to celebratory banquets. The contest was reported in detail by the media of the day, and resulted in many new students for the Wu family school, including a martial art teaching contract for Wu Ta Kuei from the Kowloon police.